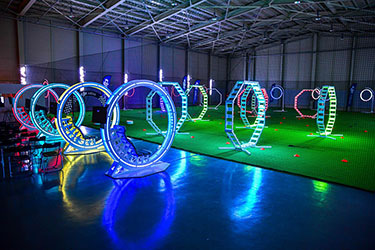 Hardly anyone would dispute DJI drones being among some of the world’s best for aerial video and photography. Drone racing, however, is a whole different ball-game from the relatively slow and steady world of camera drones, which are built primarily for shooting. Racing drones not only have to be fast, but light, agile and have excellent control—which racers will tell you counts much more than speed.

So can DJI give other models a run for their money in a race?

While DJI may not, as yet, have any of its models featuring in most top five’s listing the current best racing drones, don’t be too quick to dismiss this camera drone king.

The drone gurus at Half Chrome note the similarity of the DJI Spark to a racing drone, and indeed, in terms of size there’s a lot about the Spark that brings racing to mind. Fans have tried racing with the Spark, and it’s a great, relatively more affordable way to get into racing as a beginner. It can fly just under 50 km/h, which, while not as fast as pro-racing drones is still quite remarkable. Half Chrome has also proven that the Phantom has the potential to become a force to be reckoned with in a race, after building their own racing drone out of a DJI Phantom 4 and dubbing it “R”. As DJI’s top-of-the-line camera drone, the Phantom series is known for its superior shooting and control capabilities.

Though it may not look a lot like most other racing drones, they are sleek, and their frames have been shown to be capable of extreme manoeuvrability.  And because most proud racers worth their stripes prefer to customise their drones, the Phantom’s plastic frame has been said to be conceivably easy to strip and build into. Meanwhile, the experts at Drone Rush have included the Mavic Pro as an “unexpected” entry on their list of best racing drones.

Already in their good books as one of the best drones, best camera drones and best drones for beginners, the Mavic Pro may not exactly be top of mind when it comes to racing—although DJI has just come out with the Mavic Air, which is faster and smaller than the Pro and has a better camera.

You may not win any grand prix’s with the Mavic, but you should be able to put up one heck of a fight in a friendly race. Because even if the Mavic is big for a racing drone and may not respond as readily while in flight, DJI does have a secret weapon (or two) up its sleeve. Used in tandem with the Mavic, the DJI Goggles RE (Racing Edition) give you better control of your drone by just moving your head. Every racer knows it’s not about how fast you can go but about how well you can control your drone, and First Person View or FPV goggles are about as indispensable in a race as the drone itself.  Just put the goggles in head-tracking gimbal mode and you’re ready to roll.

You can even connect two pairs of RE goggles together to allow a “co-pilot” to fly alongside you. The goggles are likewise able to support video streaming and panoramic views using the OcuSync Video Transmission Module.

The good news is that while we’re waiting for DJI to come out with its own racing drone series, DJI Goggles RE can be used with other models and controllers. The goggles are available in a special Racing Combo that includes an OcuSync Camera and Air Unit, as well as a charger, antennas, connectors, micro USB and HDMI cables, and other accessories. Fast as a Snail

Giving a whole new meaning to “snail’s pace”, DJI’s Snail Racing Propulsion System is the serious racer’s secret weapon. The system comprises a propeller and a motor that are specially designed for optimum speed, agility and responsiveness.

Unlike a camera drone’s propellers which are engineered specifically for hovering, Snail’s 5048S Tri-Blade racing propeller is built for forward flight, with less drag and more thrust. The Snail series of propellers are easily changed and have been tested for strength, and can be used not just for racing but also for camera work and 3D flights. The 5048 propeller can also be used with other models.

Together with its Tri-Blade, Snail’s 2305 Motor produces 15% more thrust than the average racing drone motor. Weighing in at a minimal 27.8g, the Snail motor is built to withstand extended flights and repeated impacts.

The Snail System is also programmed to respond faster and provide precision control during a race, particularly when it comes to sudden stops and sharp turns. The system uses a 32-bit 100 MHz MCU inside the Snail 430-R ESC, which is designed to be compact and able to sustain continuous currents of up to 30A.

The Snail system can be further adjusted to suit a racer’s preferences using the DJI Assistant 2 and the DJI Takyon electronic speed controller or ESC Programmer. You can customise the way your drone flies and tune it up before a race.

The DJI Takyon series ESC is a super-efficient and intelligent system on a chip (SOC) that gives racers faster, more accurate and effortless control. The system is easy to update and integrate into your drone’s set-up. Takyon is smaller, lighter and uses less power—all vital to racing performance.

The ESC can even protect your drone’s motor and propulsion system by cutting the power in case of a stalled rotor, rotor blockage or rotor-lock. Takyon scans connected motors continuously in real time to help avoid or minimise system damage.

Be sure to get your DJI racing accessories and DJI drones in Australia only from an authorised DJI store. At D1, you can place a Custom Order to get the accessories you need at a great packaged price. Get in touch with us to get help for choosing the best drone racing gear for you today.